Circa was delighted to collaborate with prolific tenor Hans Jörg Mammel for our recent performances of En Masse in Stuttgart and Barcelona. En Masse is a wild, tender and savage ride, presenting two visions of humanity at its extremes through circus settings of Schubert’s Winter’s Journey and selections from Swan Song as well as Stravinsky’s Rite of Spring. Hans joins our ensemble onstage performing Schubert’s exquisite songs of loss and love. 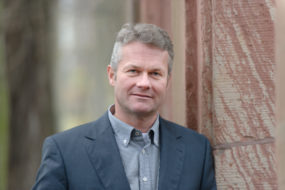 Hans Jörg  Mammel was born and educated in Stuttgart, where he received his first singing lessons as a member of the Stuttgart Hymnus Boys‘ Choir.

Initially he studied law before entering Freiburg Music Conservtoire to study singing with Professor Werner Hollweg and Professor Ingeborg Most. He has taken part in vocal masterclasses with Barbara Schlick, Elisabeth Schwarzkopf and James Wagner as well as a masterclass in authentic performance practice with Reinhard Goebel.

In opera he has appeared as a guest artist with the Berlin State Opera “Unter den Linden”, Freiburg Theatre, and the Vienna “Festwochen”. He sang the title role in Monteverdi’s Orfeo in Iceland with considerable personal success.

He also is in great demand as a lieder singer. As well as the renowned song cycles of the Romantic period, he has particular interest in the composers of the Second Berlin School: in song recitals he has introduced the public to unknown works by Carl Friedrich Zelter, Johann Friedrich Reichardt, Johann Peter Abraham Schulz and Robert Franz. He has recorded many of these works on CD, as well as the song cycle “Die schöne Müllerin” in the version for tenor and guitar, which received high critical acclaim.