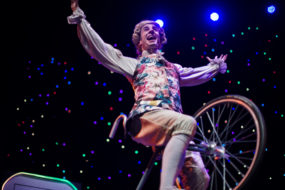 After touring to London, New Zealand and around Australia, the dynamic duo that is Kat and Paul O’Keeffe are venturing through regional Queensland along with musician Gareth Chen this July with Wolfgang’s Magical Musical Circus. We caught up with them to talk how the wigged genius comes to life on stage, their journeys to circus and what it’s like performing for young people.

What is Wolfgang about?

Wolfgang’s a circus adventure, where two acrobats tumble and climb on each other as they discover this weird and crazy world. Musical scores and conductor’s batons fly through the air, a bike has a near miss with a music stand, chairs are stacked up high and climbed on and an ever increasing mess is made. All accompanied to the wonderful music of Mozart and Quincy Grant and performed by a golden velvet onesie wearing cherub playing an accordion. It’s fun and energetic mayhem for the whole family.

What are both of your roles in the performance?

Paul- I play the character of a slightly cheeky, mischievous, comedic and acrobatic Wolfgang Amadeus Mozart.

Kat- I play a woman who is having a birthday. Unfortunately, no one shows up so I put on a Mozart record. Wolfgang then comes to life and a journey between us entails. 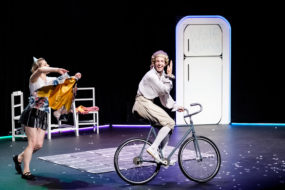 If you were not a performer what would you be doing?

We’ve only ever been highly physical people so the thought of not somersaulting or jumping on our heads is hard to imagine. If not a performer we would still probably need to be upside down at least once a day.

How do you prepare for a performance?

Usually for each show we start preparations two- three hours before the curtain goes up. This involves warm up stretches, acrobatic training, rehearsals, costuming, make up. Finally the performers and production team all come together backstage for our last chat to focus and energise everyone ready for the show. 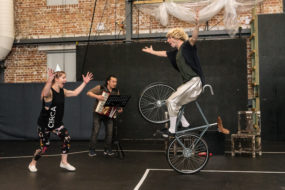 What do you ‘specialise’ in, in terms of circus performance?

Kat- I was a late starter in to circus. I started in my 20’s however before that I was a dancer and before that I started gymnastics when I was 2. I have always liked moving, being upside down, climbing and being climbed on by others so circus seemed like a natural progression for me. In Wolfgang’s Magical Musical Circus I am able to bring some of my ballet training into the show. Paul and I do a duo where I am wearing pointe shoes but we add a circus twist to it where he stands on me.

Paul- I grew up in a youth circus where I learnt all sorts of circus skills varying from ground based acrobatics to aerial work. Since then I have continued to grow my skills in as many areas as possible. I bring a lot of my acrobatic skills into Wolfgang’s Magical Musical Circus. There’s tumbling, object manipulation, I stand on top of Kat’s shoulders and there’s a balance that I do on top of precariously balanced chairs all stacked on top of glass bottles.

What’s it like performing for children? How is it different to performing to an adult audience?

Kat- Circus has this wonderful ability to bring out the child in everyone. Audiences, whether it be adults or children are able to be drawn in and mesmerised into the world of circus that leaves them questioning how things are possible.

Paul- Performing to children is a wonderful experience. They’re always incredibly vocal with their excitement and enjoyment. They’re also very honest and are not afraid to share their thoughts out loud. They’re one of the best critics.

We both appreciate how this show has something for everyone whether you’re a young child or young at heart.

We had two women come up to us after the show once that said “we’re not here with any kids but we absolutely loved the show and can we take a photo with you”. That was so lovely to hear that not only were kids enjoying the show but so were adults.

Do you think this performance makes classical music more accessible to children? Why?

Paul- Absolutely. Days after seeing our show a younger audience member was humming Mozart tunes at home. Even if they didn’t realise at the time of seeing the show that they were listening to classical music, the music itself must have resonated with them to want to reimagine it days later.

We have worked very hard to make our show not only just a fun theatre experience for the kids but also one that is enriching in texture both physically and musically. 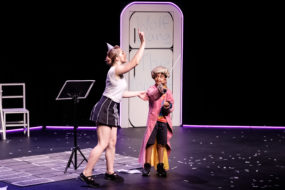 It’s quite unique combining circus performance with Mozart’s music, what’s that like as a performer?

Paul- The music of Mozart fits perfectly with circus. Circus is full of detail, risk, excitement and layers of texture as is Mozart’s music. There are wonderful offerings within the music that fit the dramatic tension and release of circus.

Who should come to show? Just people with young families or is it suitable for everyone?

Kat- We thoroughly enjoy performing the show and believe it’s a show for everyone whether you’re new or old to circus, have a strong interest in classical music or if you’re just experiencing it for the first time. It’s suitable for young families, older families and anyone who would like to go on this journey with us.

Paul- However, if you’re still not sure whether it’s the right show for you then we have a lovely quote to share with you from Herald Sun reviewer Paul Selar- “Take your kids, take someone else’s or unashamedly take yourself.”

What do you hope the audience will get out of the performance?

Kat- Wolfgang Amadeus Mozart was an inspirational man, who liked to have fun whilst creating absolutely magical music.

For us to have the audience inspired to learn, play and create would be a wonderful achievement.

Sum up the show in three words