Amid the whirlwind of performing Humans five times a week at Underbelly at the Edinburgh Fringe, acrobat and all-round incredible human Marty Evans caught up with us to talk Humans, pre-show rituals and inspirations. 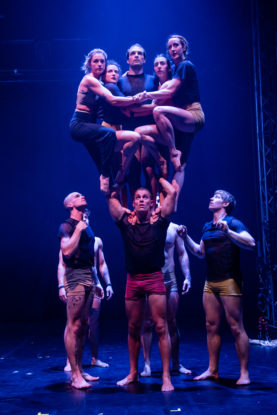 How did you originally come to be a circus performer?

I found circus late while I was studying a maths/chemistry degree at the University of Sydney. I then discovered the National Institute of Circus arts in Melbourne where I graduated with a Bachelor of Circus Arts. After graduation in 2015 I began as an ensemble member at Circa where I have been ever since. With them I have performed in over 20 countries around the world.

Why is Humans such an important show now?

Humans premiered in Sydney at the beginning of 2017 and has been performed all over the world in a variety of forms. Humanity will always be a relevant topic, so hopefully our audiences at fringe can relate to some of our struggles, successes and perhaps our inability to complete a seemingly simple task…

Do you have any top tips for surviving the Edinburgh Fringe Festival – both for performers and visitors?

My absolute top tip is to make a calendar, must see shows tend to have similar time slots, so I find it important to plan ahead to not miss anything. Number two for me is always the search for a good coffee (or tea), luckily Edinburgh has plenty of options for caffeine!

What gives you inspiration in circus and why?

I have such a wide range of inspirations from both inside and outside the industry; I’m still constantly inspired by mathematics and try to apply that to the way I approach my circus practice.

Do you have any pre-show rituals?

As a group we always come together just before we head on stage to connect with each other and do “chookas”, which normally leaves me making some chicken noises.

Humans performs at Underbelly at the Edinburgh Fringe until 24 August. Book tickets.
See where Humans will be performing next.