Seppe Van Looveren describes himself as a sharp-minded, playful, blue eyed, Belgium fried acrobat! Seppe’s acrobatic and artistic vocation started in his neighbors city garden, leading to his involvement with Ell Circo D’Ell Fuego (ECDF), an Antwerp-based artistic and social circus project known for ‘training their youngsters into lions.’  After 6 years at ECDF, he continued his training at The National Circus School of Canada in Montreal. Steppe is now ready to create, work, invent and explore the explorable.

What inspired you to become a performer? Who was your biggest influencer?
I started to practice circus about seven years ago at a circus school in Antwerp, Belgium (my hometown) called Ell Circo D’ell Fuego. I would go there three times a week minimum to do acrobatic training and stage performance exercises. I was not a performer at this point, but the people around me were always busy preparing for the next event to perform. At one point the organization included me into one of their new creations and that is when I first stood on a stage as performer and when I knew that this was an amazing feeling that I would want to keep doing. Later on I moved to Montreal to follow a three-year intense training program at the National circus school. The three people who have inspired me the most would be Arno Wouters and Bert Beyens, my two head coaches of acrobatics, circus and arts and Jerome Lebaut, my hand to hand teacher in Montreal.

What type of training do you do on a daily basis?
At the moment we do about 8 hours a day of training. The extra physical work I do is what I want to do on daily basis myself. This all depends on how much energy I have but I’ll always do some kind of power training to maintain my overall fitness.

Do you have to have a special diet to be an acrobat?
I like to eat. Depending on the layout of the day I will have 3 or 4 good meals and some snacks whenever I can. People often ask me, because I’m an acrobat, if I have eating habits like a gymnast. I don’t know much about their eating habits other than the clichés but I always say no, because I don’t really follow a diet. I eat what I want and as much as I want. We burn so many calories training every day that sometimes even I am surprised of how much I eat. I don’t really eat candy or other sweet stuff. A quick snack would rather be a bowl of granola with fruit.

Because of long work days and ne eating a lot of food I usually will cook big dinners so I can put some away to have as lunch the next day. An example of what I would eat in a week looks something like the below:

Breakfast: A 3 or 4 egg omelet with veggies, bacon and potatoes and a bowl of granola with fruit and yoghurt.
Lunch: This is usually leftovers from last night’s dinner.
Snacks: 2 – 3 crêpes, granola & yoghurt, apple or banana, a muffin, burrito, eggs on toast
Dinner: Typically something with meat, vegetables and a side of rice, pasta, potato or vegetables.

Tim Fyfee enrolled in circus classes at a young age due to endless levels of energy and no medium to harness it. With this new outlet that catered not only to the physical but the creative aspects of the body and mind, Tim was able to channel this energy and discover his passion. Tim spends his time training all sorts of skills with a strong focus on hand-to-hand, movement and acrobatics.

What inspired you to become a performer? Who was your biggest influencer?
As a child, I was involved in recreational circus classes. I saw a video of Quidam by Cirque du Soleil and thought it was incredible. With this as motivation, I continued training with an ambition of one day joining Cirque du Soleil. As a teenager, I went to the Tasmanian Circus Festival a few times and found new inspirations from a generation of acrobats from The Flying Fruit Fly Circus. As my focus pulled away from Cirque, I started finding inspiration from people that I knew personally. I remember seeing Mark and Rudi perform their street show Popeyed and thought that they were amazing. Taking some workshops with them in Tasmania was very influential for me at the time.

What did your early training involve?
My early training involved a lot of floor acrobatics and group pyramid work. At youth circus in Australia there is a heavy focus on group skills. I did all kinds of things like juggling, aerials, mini tramp and table sliding. It wasn’t until I was older that I began to specialize.

What type of training do you do on a daily basis?
I refer to myself as an acrobat with a heavy focus on hand to hand acrobatics. A typical training session involves running through our fundamental hand-to-hand exercises in a pretty specific order (starting with the simple things and progressively moving towards the more difficult ones). After a hand-to-hand training session, I’ll do a little bit of strength training followed by some flexibility work.

Do you have to have a special diet to be an acrobat?
I don’t have a “special” diet. I believe that the food I consume is reasonably healthy and well balanced. I’m considered to be quite “big” for a flyer. It’s not very common for a flyer to be 73kgs, they are usually a lot lighter so I don’t fit the “typical flyer profile”. Below is an example of what I would eat in a standard week.

Breakfast: Oatmeal or Weetbix with fruit and scrambled eggs with grilled vegetables on toast
Lunch: Usually left over from dinner the night before. Sometimes I’ll have a few sandwiches: cheese, lettuce, tomato and ham or something like that
Snacks: Fruit and yogurt with granola, mixed nuts, dried fruit.
Dinner: Typically steamed or grilled vegetables with some sort of meat and sauce on either rice or potatoes. 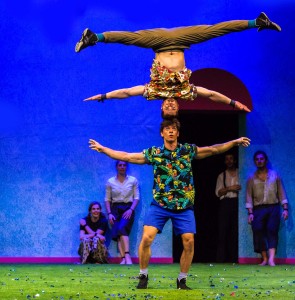