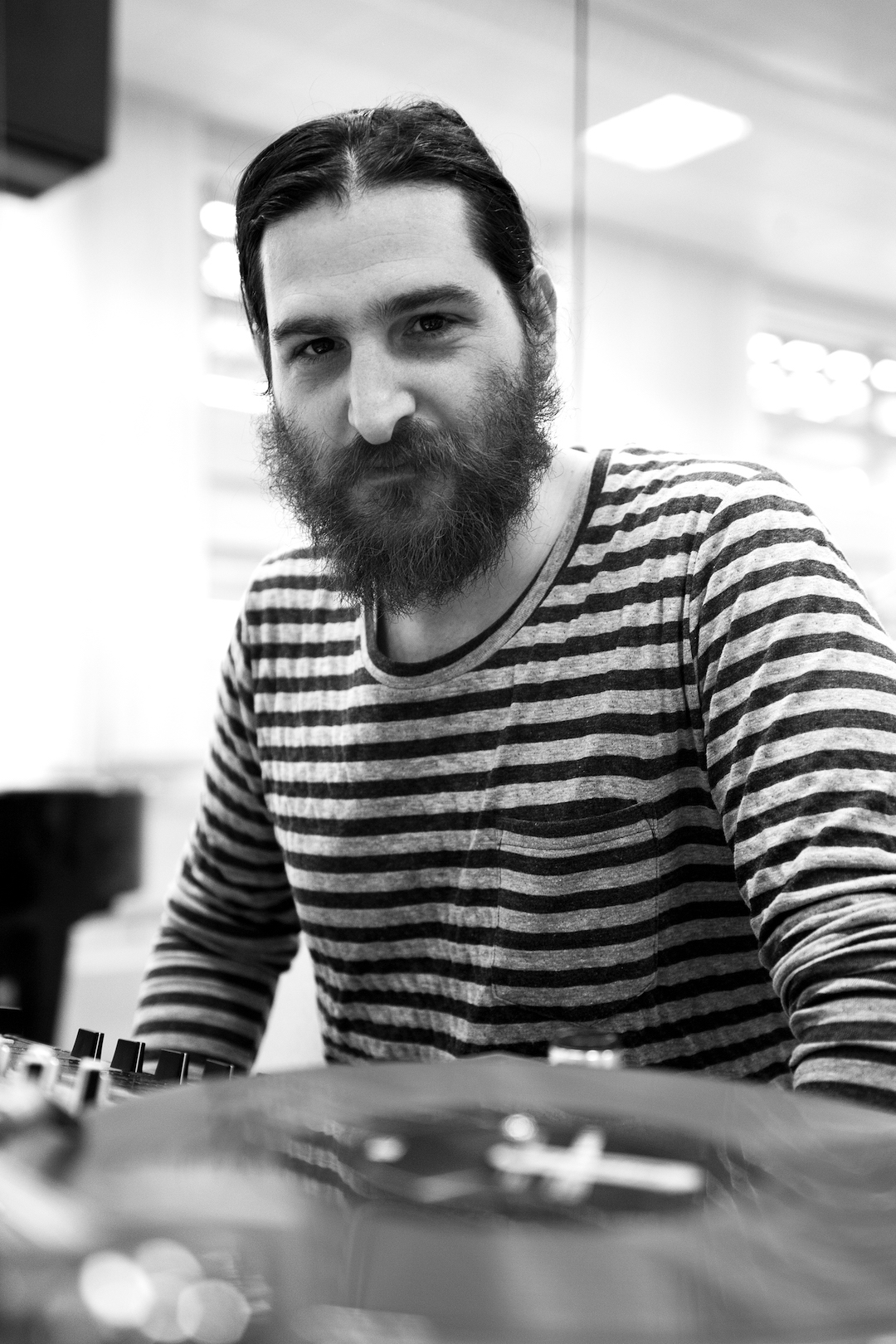 Ori Lichtik is a multifaceted musician, drummer and creative DJ. He is a long-time collaborator with the Israeli-based dance company L-E-V, and its co-founders Sharon Eyal and Gai Behar. Aside from creating the score for Circa’s Humans 2.0, he is a frequent cast- member for live works, improvising with fresh layers of digitally manipulated effects to create a unique sound experience for every event.

One of the founding fathers of the techno scene in Israel, he has created, produced and spinned musical productions, techno raves and various other music and performance events since 1996.

With Tel Aviv moving into a heightened level of lockdown, we caught up with Ori, just as he arrived in the German city of Mainz, situated near Frankfurt on the banks of the Rhine.

So Ori, what takes you to Mainz?

I just arrived yesterday to resume work on a project with Sharon Eyal, which is to be performed here at the Staatstheater Mainz. We’ve worked with them before and we’re taking the opportunity, while they’re still working and there is time, to create a new piece to be performed a fair way down the track. There is a lockdown here in Mainz as well, but it’s not as acute as the present restrictions in Tel Aviv.

From the other side the world, how did you go about collaborating with Circa for Humans 2.0. Was it a case of seeing the performance and fitting a soundtrack to it, or did you provide a piece which was then performed to?

Actually in the end, it was a combination of both – my contribution was both the chicken and the egg. Usually I would be involved in the process, on site, from day one, spinning ideas together as we go along. For this project, I needed a visual stimulus, but at the same time Yaron (Lifschitz, Circa Artistic Director] really needed some music for the acrobatic movement to respond to. We’d worked together on many elements of Peepshow [Circa’s touring production, set to commence a season at the Sydney Opera House in February 2021) and, of course, I watched video of the original Humans show, so it wasn’t a complete standing start. We gradually began to develop a common language about the work and, from then, the process was very organic.

To be honest, I’m not a composer who produces according to a theoretical or written brief, so I gathered all the information I could to understand the atmosphere and the vibrations of the work, and then I’d slightly detach myself and look to produce a piece which reflected the required tone.

When I sat down to create, I had early footage of the performer’s movements in front of me – which was crucial.

This is presumably a very different experience to DJing, where a dancefloor will give you immediate feedback about what they hear?

Certainly, there are differences. On the one hand you don’t get immediate feedback from the dancefloor but conversely, you don’t need to worry whether people are dancing [laughs]. But it’s a valid point, composing for circus and live performance gives you the freedom to explore new ideas. Back when I first started composing for stage, I was already exploring music outside techno; music I found intrinsic to movement and dance. Whatever the environment, music is music. Through rhythm and harmony, it sets a foundation of time and architecturally frames an experience. Since the dawn of culture, the beat of the first drum, our bodies have reacted to sound. A movement of music and the movement of the body is an interwoven relationship, regardless of the setting – be it in a club or on stage or wherever you may encounter it.

DJ nowadays can face boundaries, whether that be through a genre in which they are pigeonholed, or a cultural perception defined by where they play. Knowing there is a guaranteed physical response to my aural contribution offers me the freedom to explore a score much less expected or obvious.

How did you find your career develop in this direction?

When I was ten years old, I started out fooling around with double-tape, doing remixes and cutting and adapting hip hop tunes. Then, (I guess I was perhaps twelve or thirteen) I got my first mixer and honestly didn’t really know what it was or what was possible. I just connected it up to my family’s new, exciting video camera that my father had bought from Europe and mixed Sex Pistols – my favourite band back then – with my family audio from videos we’d taken [laughs]. It was a fun phonic experiment. I continued to get more into hip hop and then, down the line, discovered acid house, techno, nu-wave, industrial… acid house parties started popping up in Israel when I about 16 (around 1995), summer of love and all that stuff.

The first parties we started putting on ourselves covered the full genre-spectrum – ambient to speedcore. But then I found myself drifting towards techno. I always felt it sounded rough (in the best possible way) but it was packed full of interesting subtleties. It’s very texture- orientated. This wasn’t my view back then, but that’s how I view techno now.

Our parties and raves in and around Tel Aviv started to gather momentum. My best buddy, then and now, is [co-artistic director of LEV] Guy Behar. Gai was producing most of these early events and he started dating [co-artistic director and choreographer of LEV] Sharon Eyal. He’s a brilliant artist with a great eye and she invited him to the studio to contribute his ideas to a show in development. In 2006 they asked me to join them and make some music for LEV.

Initially I was quite sceptical. What, make music for ‘sitting people’? I thought it was weird. But then, as soon as I came to the studio and saw the incredible work Sharon was doing, I thought Yes, ok, I’m in. It was more tribalistic and textural than I could have possibly imagined and I could immediately see how I could contribute.

And how did the relationship with Circa come about?

Yaron messaged me two or three years ago, after he’d seen a work called OCD Love by LEV, performed in Adelaide. We then worked together on Circa’s Peepshow and soon after he contacted me about creating the soundtrack for Humans 2.0.

Finally, we’d love you to share a few tacks that you feel have shaped your life and career…

Poison in a Pretty Pill – Crass

Work Me Over – DJ Slip