“Beautiful” (The Herald Scotland), “a marvel to watch” (The List), and “poetry in motion” (The Times) are just some of the phrases used to describe Humans, performing in the Edinburgh Fringe Festival at the Underbelly Circus Hub until 26 August.

Premiering in Sydney earlier this year, Humans has since performed in Italy, Belgium and in the UK at Glastonbury Festival and a three-week long engagement at Edinburgh Fringe Festival. Approaching the end of the run, we wanted to share some of our favourite moments.

The humans in Humans 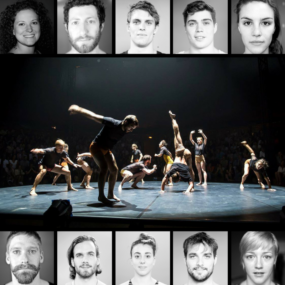 Who are the cast of Humans? If you’ve seen the show across its European tour then you may recognise a good number of these faces from our ensemble.

Read more about our ensemble including what shows you might have seen them in previously.

What audiences and critics saying about Humans

Humans has had standing ovations and sell out crowds, in addition to a warm critical response from press and audiences.

★★★★★ “This beautiful, fearlessly honest celebration of flesh and blood strengths does just that, and with humour too” – The Herald Scotland

★★★★★ “The show is incredibly brave and has a beautiful, bated-breath quality.” – Edinburgh Guide

Humans plays at Underbelly Circus Hub until 26 August. Keep up to date with Circa’s touring schedule with shows near you on our touring page at circa.org.au/tour, and keep in the loop about what’s going on at Circa by joining our mailing list, visiting our Facebook and following us on Instagram.